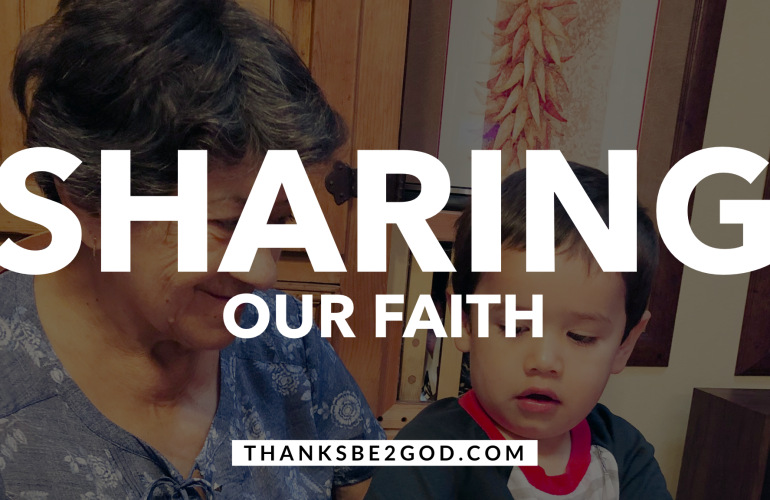 I’m also prone to playing the comparison game. I look around at Mass and see if there are children that are louder (or quieter) than mine are being at the moment.

Admittedly, this is something I’ve been trying to work on for quite a while. And, admittedly, I still slip back into my old comparison habits every once in a while.

Our oldest son, Vincent, is always so excited for Mass. He knows it’s what we do on Saturdays. He gets excited when we pull into the parking lot. He’s ecstatic when we are walking into the church. For the most part he does pretty well at Mass…but I’m also guilty of expecting too much from him (and his brother) at such a young age. I’m MY worst critic.

Vincent is almost three years old – he understands grace before meals, the Hail Mary, prayers before bedtime, and prayers when we wake up. He picked it all up really quickly.

Somewhere in the mess of motherhood and underneath the pressure I put on myself for keeping kids quiet at Mass, it occurred to me that there are other ways I can share our Faith with my sons. Ways that don’t include me putting so much pressure on my toddlers (and myself) to be perfect for Mass every week.

It also occurred to me that if I want to change my perfectionist, Type-A, and stressed ways, then I need to let some things go.

While my Type-A personality proves to be fruitful in many ways, there are also many things about it that I don’t want my children to pick up. Namely, putting too much pressure on yourself to be perfect.

I promise you, it’s much better than it used to be. But just like the ‘ol comparison game, it’s still a habit I tend to slip into every once in a while.

So instead of putting so much pressure on a perfect Church outing. I’ve been thinking of new ways to share our Faith with our sons.

Vincent is at a very fun age where he is forming opinions and is making decisions when faced with options. He’s very curious and outspoken as well.

At the same time, I’d been getting nudge after nudge to ask my grandma (Nana) if she needed a new Bible. When I finally asked her if she’d like, needed, or even wanted a new Bible, she happily agreed and thanked me (before we’d even gotten it)!

Last weekend, Vincent and I ventured out to Mardel (one of my absolute favorite stores) to pick out a new Bible for Nana.

Vincent and I probably spent twenty minutes looking for a nice, suitable Bible with large font (Nana’s only specification). I finally narrowed it down to two Bibles – a pink one and a brown one. I decided to let Vincent pick the final one.

I’m not exaggerating when I tell you that Vincent wrestled with the color decision for FIVE minutes. FIVE minutes with a toddler trying to choose something is a long time, y’all.

I let him take his time. I wanted him to know that it was an important decision. And I fought every urge to just start counting down and forcing him to rush to pick one.

It was important to me that Vincent put some thought into this.

He would put his hand on his chin, pointer finger extended, and say, “HMMMM!”

He did it about thirty times.

He ultimately chose the brown Bible and told me, “the pink one stays, we get brown for Nana.”

I decided to get her name imprinted on the front cover of the Bible. Not her actual name, but the name we all call her…NANA.

She is NANA to everyone, my family, my friends, my kids, my co-workers…everyone. She is our Nana.

So it was only suitable to get NANA imprinted on her new Bible.

I let Vincent pick out the font of the imprint as well. He chose nicely – the script font.

The next day I let Vincent present Nana with her new Bible.

He slightly tore the very top corner of a page in Exodus…his way of leaving his mark, I guess. No biggie, easily fixed with some tape (see I really am trying here, y’all).

After they thumbed through it once, he promptly said, “again!” And they did it again.

My children will not come to know Jesus by me expecting perfection at Mass each week.

Instead, my children will come to know Jesus by virtue of us sharing our Faith with them….giving them unending love…and showing them forgiveness in all ways.

There are ways to share our Faith with these littles that don’t include stressing a quiet and perfect hour at Mass. And this was a sweet reminder of that.

One thought on “Sharing our Faith”

𝘁𝗵𝗮𝗻𝗸𝗳𝘂𝗹 & 𝗴𝗿𝗮𝘁𝗲𝗳𝘂𝗹 ⁣
The Peña Bros are ready to step out for like the first time in a week! 🙌🏼
Throwback to February 26, 2020 - Ash Wednesday last year.
Texas is experiencing record-breaking winter weather and storms. In the Big Country alone many have lost power and heat, many have lost water, and many are on their last few pieces of firewood or their last few bottles of water. It’s rough and tough, y’all.
These two are definitely up to SNOW good!
I don’t know where you are reading this from but the weather in Texas has been straight up DISRESPECTFUL the last few days. 🥶